" /> Labeled for Ingestion, Are Your Oils Pure? • Gigi's House

Labeled for Ingestion, Are Your Oils Pure? 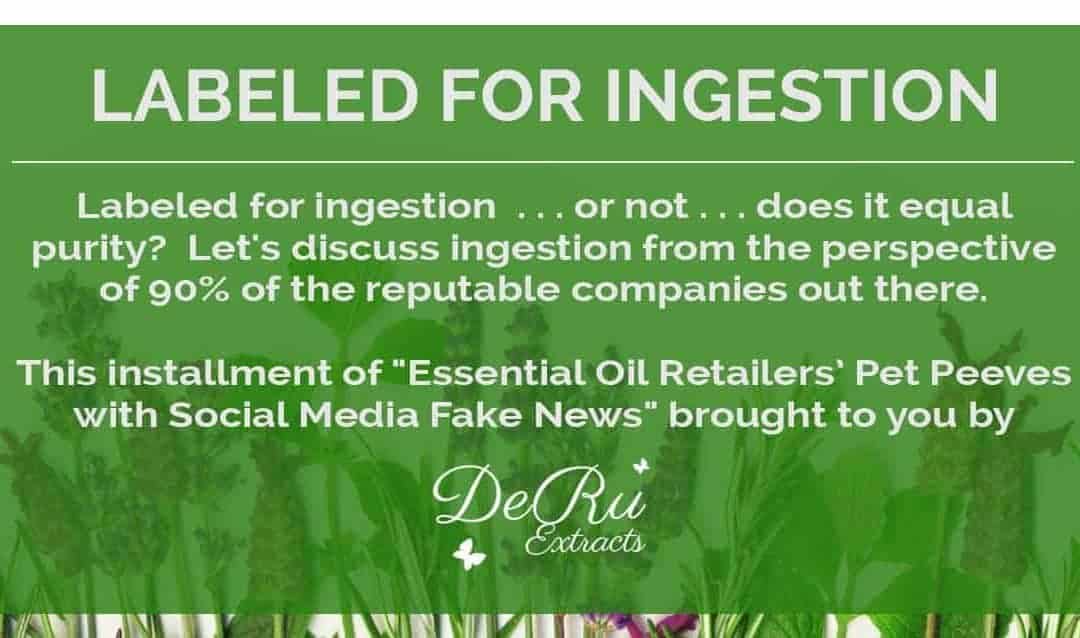 Labeled for ingestion  . . . or not . . . does it equal purity?
How about I explain the ingestion issue from the perspective of 90% of the reputable companies out there . . . .
Many years ago, it was known by aromatherapists and essential oils retailers that occasional ingestion was fine, but they also knew that a lot of oils interacted with medical conditions and medications. They formed an email chain and reported to one another about various interactions. Then, Tisserand wrote his first safety book, using all the science available at that time and breaking down problems between certain oils, medical conditions, and medications.
Today, we have a book co-authored by Robert Tisserand and Rodney Young (not to be confused with the Young of a certain company, Rodney is a trained medicinal chemist who worked for many years in pharmaceutical research ~ want to know more, read his bio). Robert knew the oils, Rodney knew how to read and understand studies since that was his life’s work. Together, they created what many of us refer to as The Aromatherapy Safety Bible, but in reality, it’s basically a physicians’ PDQ on essential oils. It references over 4,000 studies on over 400 oils. Essential Oil Safety: A guide for Healthcare Professionals. Published in 2013, for those who say it’s old . . . it’s not as old as you’ve been led to believe.
OK, having said that, let’s jump to some of the “recipes” we see online. Frankly, they terrify us. We can’t afford for you to ingest all the oils suggested (or even some of the oils suggested as I saw one with BIRCH in it the other day ~ OMG, don’t ingest birch!). They terrify our insurance companies and attorneys too ~ they’re not big on bottles labeled for ingestion.
Now, here in the US, federal law says that a bottle can’t be labeled for ingestion and topical/diffusion use. This was addressed in letters to two companies in the US by the FDA (read down to the bottom, folks ~ it’s there on both of them). One company’s response was to create an ingestion line, put new labels for ingestion on it, and bottle the same oil with two separate labels . . . oh, and charge you more for it if you’re buying the bottle that has been labeled for ingestion. So far, from the other company, all I’ve seen is their topical line, which is an issue in its own right because they refuse to tell anyone the dilution percentage . . . so we still don’t know about its safety.
So, as retailers, we can’t bottle for all modalities with a single label. We have to choose one or the other ~ or we have to create two labels for the same oil, like one company did. And forget that nonsense about “if it’s not labeled for ingestion, it’s not pure” . . . because folks . . . . all of one company’s previous line is no longer labeled for ingestion! Yeah. Let that sink in.
In general, reputable retailers are trained in aromatherapy and know that inhalation is the BEST way to benefit from oils in 95% of cases (the remaining cases are about 4% topical use and 1% ingestion) . . . so, of course, we’re going to label for inhalation over ingestion!
And, if we label for ingestion, we’re suddenly liable if you run to Pinterest to figure out what to dump down your kids’ throat for ADHD or the Flu . . . or hey . . . AIDS, or Norovirus, or . . . yep, if you can name it, there’s a pin that says essential oils will cure it. By the way: reputable retailers call BS. Oils are great, but they’re only one component in a health regimen ~ and not always the best one for the case.
For efficacy and liability, reputable retailers choose to label our oils for topical use or inhalation therapy.  We also highly suggest that someone who wants to ingest fork over the cash to someone trained in Aromatic Medicine who totally understands contraindications with medicines and medical conditions.  This person will also fully understand dosing and other forms of internal use as swallowing isn’t always the best form of internal use for a given condition (think suppositories and pessaries, folks ~ yeah, they’re real). I don’t mind paying someone trained in Aromatic Medicine $60-$100 (depending on the services) to give me a hand there when I need it because I haven’t been through that training myself.
And now you know.
LATER you can hear my diatribe on the whole 5% oil, 95% chemicals myth . . . cause yeah . . . that is totally illegal here in the US. Maybe not at one time, but it has been illegal for a LONG time. Stay tuned for the next installment of “Essential Oil Retailer’s Pet Peeves with Social Media Fake News”